A Childhood Spent in a Romanian Village

A Childhood Spent in a Romanian Village

This was a community contribution by Raluca, a girl from Romania.

Romania is a beautiful country, but its rural areas are even more stunning. I consider myself lucky thinking about the fact that my grandparents were true peasants, living in an authentic village, where traditions were very much alive, and I am very proud of my Romanian heritage. I see most of today’s children that visit their grandparents in the city, in the flats where they live, which I consider a very sad thing. For me, there was something special about going to the countryside. It meant freedom, fresh air, farm animals, and a simple life. Everything smelled and tasted differently there, from the water we drank, to the fresh air in the morning, and the food my grandma used to make. I still love feeling the smell of burnt wood, as it reminds me of the winter evenings in the village, every house releasing tall columns of smoke, from their furnaces.

The village of my grandparents is located in the north of Romania, in the gorgeous historical county called Maramures. The views are picturesque and many traditions are still kept by the young generations, as a valuable heritage left by their parents and grandparents. I used to spend more time here in the summer and winter, when I had vacations from school. Summer time in the village meant playing in the orchard of my grandpa, climbing in trees, enjoying apples, pears, and cherries right from the trees, and running free on the meadow.

I still remember that the grass used to be so tall that it reached by armpits, as a little girl. Grandpa used to let it grow this large, so he could later on cut it for his cows. Yes, he had cows, four of them actually, and pigs, and chickens. He loved tending for the animals because they provided the food he needed every day. There were always fresh eggs at breakfast, fresh milk twice a day, and cottage cheese and sour cream all the time. Vegetables were growing undisturbed in the garden and meat was available as well, so my grandparents rarely needed anything from the local store. 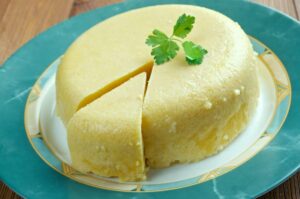 Mamaliga – Romanian porridge made out of yellow maize flour

I remember grandma always preparing something delicious. For them, shopping for groceries meant to buy things like sugar, rice, or anything else they could not make themselves. Everything from bread, to noodles, jams, wheat flour, and even oil, was made there. They were using their harvest of wheat and corn to make flower, and sunflower seeds to make oil. The fruits were transformed in house-made jams and some of the vegetables, in the autumn, were prepared and placed in jars, so they can be enjoyed during the cold season as well.

If you never visited Romania before, you should know that there is a special dish that is highly appreciated here, not only in the countryside, but throughout the country as well. It is called “mamaliga” or polenta, as it is internationally known, being something similar to porridge made out of corn flour. Mamaliga was served quite often at my grandparent’s house, with cottage cheese, sour cream, and sausages. It was also served with beans stew or jugged cabbage. If you ever come to Romania, you have to try this, among other amazing types of food you can find here.

Winter was another great time of the year to come to my grandparent’s village. Because we live in the north of the country, the snowfall is plentiful during wintertime. So, going to see my grandparents in the winter meant only one thing to me, as a child. It meant to get together with the rest of the kids in the village and going out with our sledges. There were many hills in the village, covered with snow, the treat of every child that wanted to slide on them with the sledges. We used to make contests and try to see who runs faster, doing this from morning to evening, without feeling the cold or being bothered when getting wet due to the snow. In the evening, I was beat. 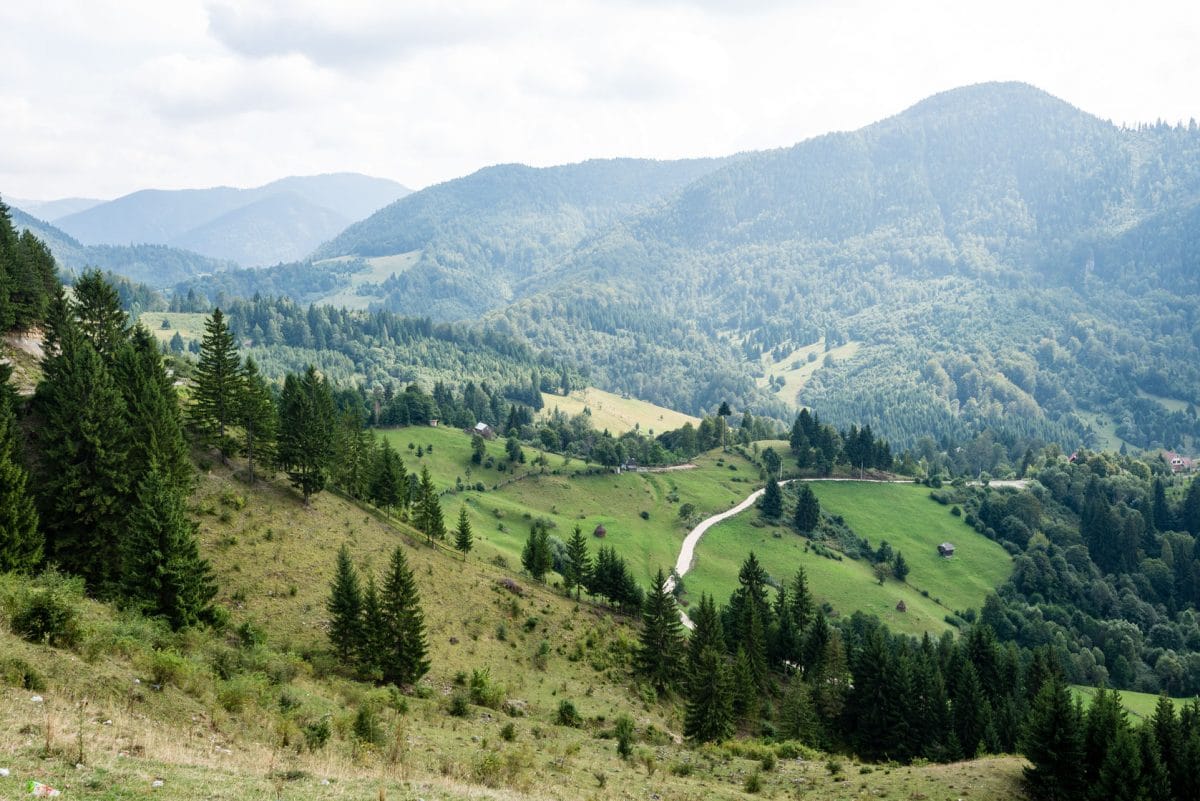 An entire day spend out in the snow, while having so much fun with the other kids, simply drained my entire energy. Also, the warm and cozy fire made by the furnace was slowly melting me down, together with the delicious food served by my grandmother.

I will always remember those Romanian winters and the fact that I used to run barefoot in the summer. When I was there, I never had a care in the world. I used to wake up in such a good mood, always waited by my grandma with fresh milk and a pie, or something similar. She used to do anything to make my day more pleasant, like some home-made desserts, popcorn made traditionally in a hot pan, or even preparing soap with water, while giving me a real straw from the haystack, to help me make soap balloons.

For some, such simple things may seem boring, but for me, they offered me an incredible childhood I will never forget. That simple life in the countryside, where things were simple ad genuine, is still charming and fascinating to me. I was raised in the city, of course, not in that particular style of the village, which may be one of the reasons I find life in the countryside so beautiful and unique. 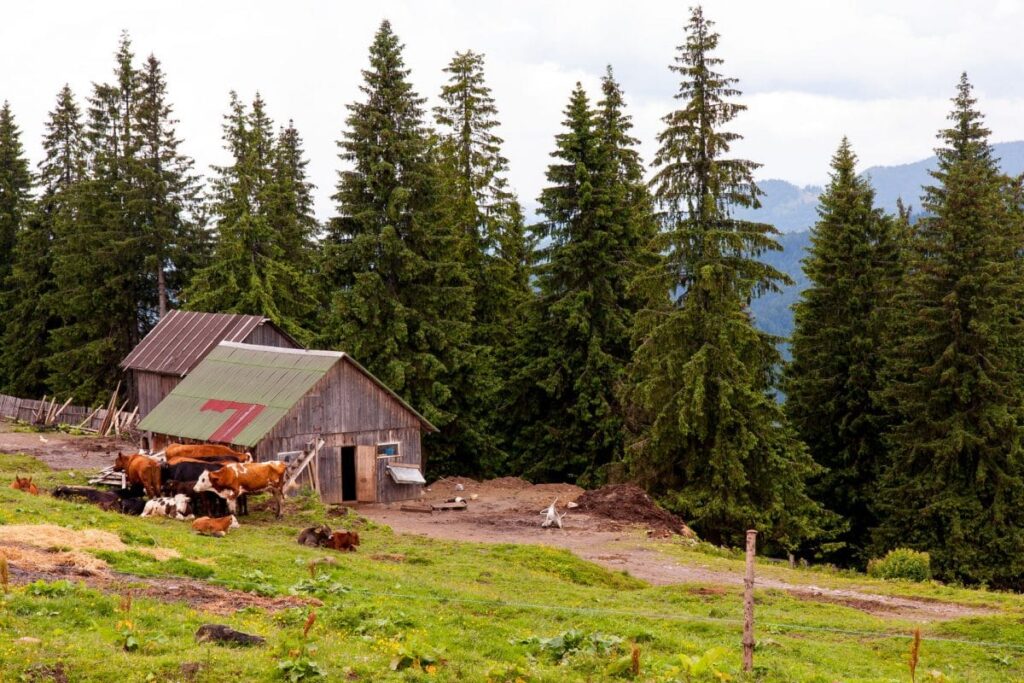 Cows, resting at a farm in the Romanian Carpathians

I still feel the need to take off my shoes each time I see green grass, so I can relive my Romanian childhood once more. I still appreciate a juice tomato taken from the garden, accompanied by some fresh cheese and bread. But, at the same time, I know that many children these days will not have the chance of experiencing the same type of pure childhood, due to our modern times and due to the fact that most people live in the city, including grandparents.

In my opinions, this is a very sad thing, because we tend to forget that the simple joys of life are the ones that bring the biggest happiness. This is why I do my best to visit the countryside as often as possible, so I can enjoy a bit of my childhood in spite of my busy lifestyle.

About the Author: Raluca

Raluca is a Romanian writer whose work reflects the cultural heritage of her home country. Her writing explores the complexities of the human experience through a unique perspective.