As an Amazon Associate I earn from qualifying purchases.

Padmini Spiritual Guide incense sticks are made from a quite famous producer, obviously known as Padmini. I came across these incense sticks online, as they are not typically available in my region of the United States of America. I thought they looked rather interesting, and I really like incense, so let’s delve in.

The packaging is rather pretty. A dark blue on one side, that fades to light blue on the other side. An image of Parvati is depicted vertically along the opposite side as the words. To give you a decent idea of who the Hindu deity Parvati is, here is a description from Wikipedia.

Parvati is the wife of the Hindu god Shiva – the protector, the destroyer (of evil) and regenerator of the universe and all life. She is the daughter of the mountain king Himavan and queen Mena. Parvati is the mother of Hindu deities Ganesha, Kartikeya, Ashokasundari. – Wikipedia

In the upper corner, a red triangle mentions that these incense sticks are sold for 50 RS. Apparently these are not meant for sale in the United States of America, as the box says it is ‘For Sale in India Only’. The box apparently contains 50 incense sticks. This is supposed to be one of Padmini’s most popular scents and claim on their website that these are hand-rolled and made with natural fragrances. I assume by ‘Spiritual Guide’ that this is intended for introspective practices, such as meditation, yoga, or religious offerings. 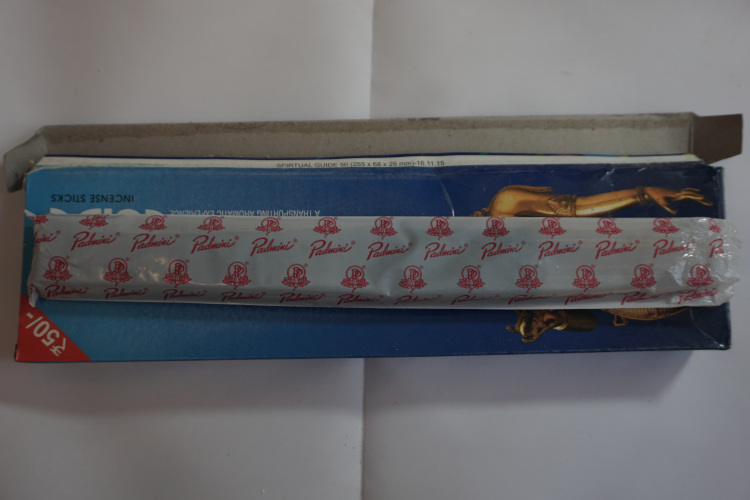 Once opened, I noticed Padmini’s signature plastic bag, adorned with their iconic logo and name. 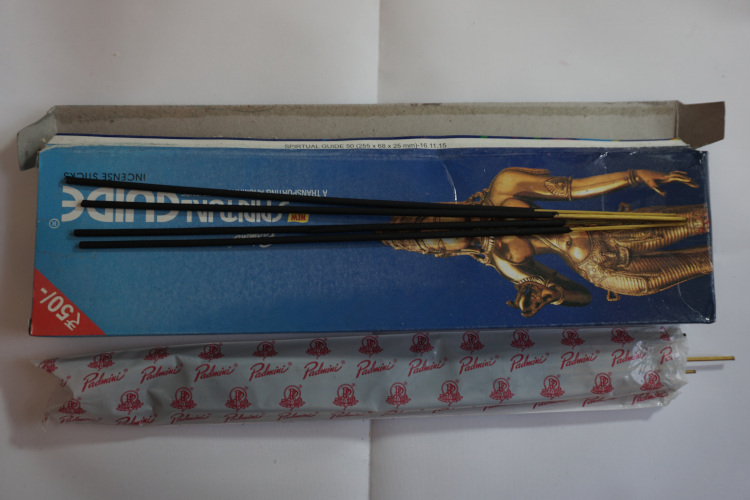 I could immediately tell that these are simple charcoal based incense sticks. Obviously not top-shelf incense, but that doesn’t mean it’s bad or anything. Quite a lot of Indian people burn incense such as this daily, as it is much cheaper than the type of stuff burned for ceremonial events.

The initial sniff I experienced before burning these incense sticks contained a lot of high notes. It almost smells like a perfume. I could definitely see a young Indian woman wearing this fragrance as a perfume. There is a slight bit of balsamic, but it is light.

Overall, it’s a little sweet. It actually smells quite nice.

Upon burning an incense stick, I noticed that the sweetness died down a slightly and it became a slightly funky smelling floral smell. I am honestly not sure what floral scent this primarily is. It seems to be a blend, of which I am having difficulty identifying, but again, there are a lot of high notes. I would have enjoyed this more if it had a more earthy, sandalwood attribution or something similar to it. The balsamic simply wasn’t enough of a deep note for me, but I could see some people really liking this. Just keep in mind that it doesn’t have deep scent profile.

I hope you found this information beneficial.

About the Author: Reeds Handmade Incense

Reed's Handmade Incense takes great pride in helping to keep the ancient art of incense alive in the modern world.