Although Instagram is well-known to be a haven of dog photos, people eating their dinner, and working out at the gym, it turns out it is also an interesting place for history buffs.

The Gettysburg museum is a wonderful place to visit, and a museum which we highly recommend. They have 6 buildings on site and I doubt you could find a place where you could learn more. However, they also have an active Instagram page where you can learn about historical places, figures, and objects. Take for example this photo of Pope Gregory XV.

Happy birthday to Guercino, born #onthisday in Cento, Italy in 1591. He was largely self-taught, though he also served an apprenticeship. Throughout his career, Guercino’s style underwent dramatic changes. From 1614 to 1621, Guercino painted his most #Baroque creations after being summoned by Pope XV—featured in the painting above and on view in the Getty Center’s East Pavilion, Gallery E201!
⠀ 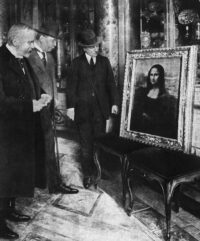 This Instagram channel is ran by The History Channel. They are a very popular TV channel and producer from the USA. They boast over 4.2 million followers and 2,130 posts about a wide array of historical topics. If you view the hashtag #thisdayinhistory you will get to see posts about popular events that happened that day in history.

It was on #ThisDayinHistory 1913, that one of the world’s great art heists was solved.  Da Vinci’s Mona Lisa was stolen from the Louvre in the summer of 1911 by handyman Vincenzo Peruggia. It was 24 hours before anyone even noticed the Mona Lisa was missing and interestingly enough, it was this theft that made the painting one of the most recognizable in the world. For the first time, people queued outside the Louvre, just to see the empty space where the painting had hung. Today the Mona Lisa attracts more than 9 million visitors to the museum per year, and has cemented Da Vinci as a cultural artistic icon.  In fact, his “Salvator Mundi” was purchased for $450 million, an almost unheard of sum.

Historycoolkids is an interesting Instagram page which boasts 426,000 followers and 2,788 posts.

They mostly post and discuss images of glamorous characters throughout history.

You will find sophisticated content and we are sure you will enjoy this page.

Take a look at this painting of Turkish Women in the 1600’s.

In 1656, the Ottomon Grand Vizier Koprulu issued new laws banning coffee and shutting down coffee houses for fear that men were gathering too often, to sip coffee, question political authorities and perhaps, plan a revolt. After violent riots by the people and tremendous backlash, authorities quickly abolished those laws and instead switched to heavy taxation of coffee houses.

If you love history- follow us – We share the most powerful and entertaining historical images ever taken.

They post a lot of interesting photos from throughout history.
Take a look at this photo of Jerusalem, c. 1890’s

Ancient Origins mostly posts about ancient history, but even if that fails to intrigue you, they often post photos of beautiful architecture as well.

They do a good job at unraveling mysteries of the past and providing an alternative perspective.

Ancient Origins also has a podcast if you are interested.

Seeks to #uncover, what we believe, is one of the most important pieces of #knowledge we can acquire as human beings – our beginnings. #ancient

Take a look at this photo of Castel Sant’Angelo, a monument of Rome, located on the right bank of the Tiber.

National Geographic, a popular publication, has one of the most popular history-based Instagram accounts available.

Experience the world through the eyes of National Geographic photographers.

Photo by @adamjdean | Novice monks walk through the Rinpung Dzong Monastery in Paro, Bhutan.
This is a guest post by Alex Torres.
If you are interested in contributing an article to our website, you may view our guest posting guidelines at the link below:
Culture Exchange – Write For Us
2019-11-23T01:12:43-05:00By Alex Torres|History|0 Comments

About the Author: Alex Torres