Japanese dance stems from a rich mythical tradition, starting with the people and cultures that lived and existed in Japan in ancient times. When contact, trade, and migration between mainland China and Japan increased, dance traditions evolved as well. They became more intricate and spectacular, with colorful outfits and new musical instruments that accompanied the dance moves.

Bugaku, for example, was one such repertoire of dances which scholars believe were brought over from China. These dances were performed in the Japanese Imperial Court, and the dancers wore extravagant, brightly-colored costumes that were considered works of art. 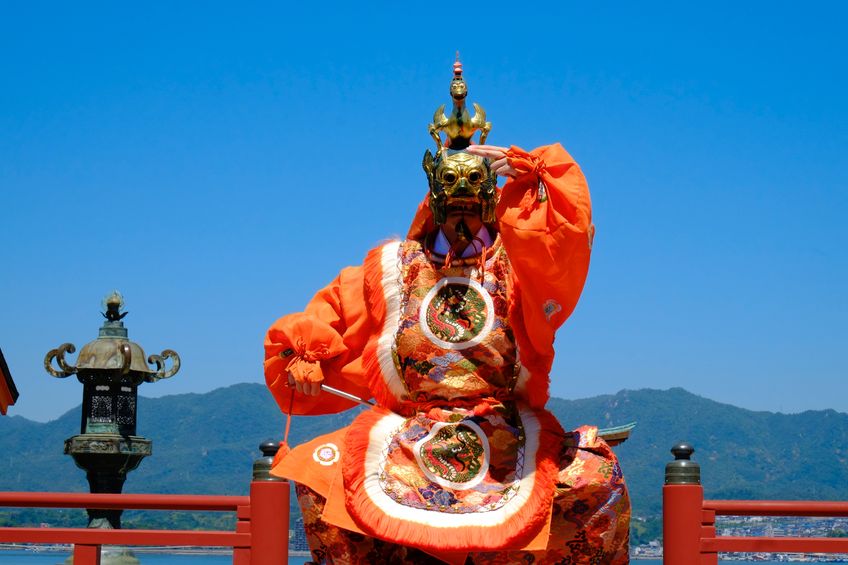 Sarugaku, on the other hand, was a form of dance and theater popular among peasants and the common folk. Literally meaning “monkey music”, sarugaku performers took inspiration from a type of Japanese circus that included acrobatic tricks, juggling, and pantomime.

Festivals held at a certain time each year also had their dances. Bon Odori is a dance named after the festival of Bon, which takes place in August of each year and commemorates the ancestors. It is very participatory, and at Bon celebrations, you’d see hundreds of people dancing together, with a background of drums and traditional music setting the stage for their performances. The dancers wear fine, colorful kimonos. Nihon buyo is another traditional dance, but it is different to the very lively and celebratory Bon Odori, with individual dancers using fans and ropes as part of their performance. The movements are slow, with specific, gentle gestures, each of which has a meaning.

Noh is a highly theatrical dancer performed by dancers dressed in kimonos wearing intricate masks. There are around 450 different masks based on sixty “types” (human, male, female, non-human, a commoner, aristocrat, and so on,) with each masking having a name. The Noh plays are accompanied by a choir and musical instruments such as lutes and drums. The dances are carefully choreographed, and usually tell the story of traditional Japanese fables or legends.

Kabuki is perhaps the most famous and well-known of the traditional Japanese dance forms. A “dance drama,” kabuki incorporates dancing, acting, and singing into a memorable and impressive performance. It has been an important part of Japanese popular culture for hundreds of years, and usually tells stories about Japanese history and society – from historical drama to romances and everything in between. Kabuki is known for the heavy makeup worn by the actors – even men, who traditionally (and still) play both female and male roles.

In fact, kabuki started off as a female-only art, with many of the performers working as prostitutes, but after several generations, the Japanese government cracked down on the art form, and male actors for all parts became the norm. In modern times, however, more and more women are working in kabuki troupes and performing onstage – although not engaging in prostitution on the side anymore.

The koto is Japan’s national instrument, a type of zither that has 13 strings. It is played by plucking the strings with the thumb, forefinger, and middle finger of the right hand, which wear a type of finger pick called “tsume” that are similar to thumb picks for the guitar. Also similarly to the guitar, the fingers of the left hand are used to hold the strings down and change their sound. The koto was often played by blind musicians due to the ease of playing it and has been associated with such blind musicians for a long time. It has remained popular all the way up to modern times, and many Japanese musicians still choose to learn and master the zither. 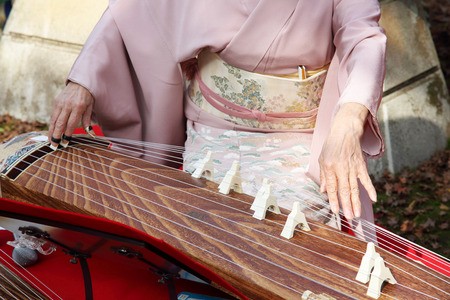 The shakuhachi is a bamboo flute with five holes. Originally introduced into Japan from China, the shakuhachi was used by Zen monks for a long time as a meditative and spiritual tool, due to the slow and rhythmic breathing techniques that had to be mastered to play the flute. The gentle and calm sounds of the shakuhachi eventually became more popular and were adopted into popular culture, and it is often played in kabuki and other plays as a background instrument.

A three-stringed instrument that resembles a violin, shamisens were popular at kabuki shows due to the range of sound the long, thin neck could provide. Played with a wooden stick called a “batchi,” shamisens were also a popular instrument at folk shows for common people. It is still popular at traditional music events and festivals in Japan.

Biwa is a short-necked fretted lute, which arrived in Japan from mainland China in the 7th century. The biwa is the instrument of the goddess Benten, who represents music, poetry, and education in the Shinto tradition. It is often used in narrative storytelling performances by samurai (who also used it for mental training) and travelers, and while the biwa was almost entirely forgotten and abandoned as a result of the Meiji restoration, it is now experiencing a comeback among Japanese musicians.

Japan is a country that, due to its island nature and relative geographical isolation from the rest of Asia and the world, developed a unique and deeply rich culture. From high-class court dances and other things favored by Japanese elites, to acrobatic and popular dances that simple country and city folk flocked from far and wide to see and participate in, traditional dance makes up a rich vein of Japanese historical and modern culture.

The instruments that accompany the dances create a distinctive soundscape that is recognized immediately all over the world. And the “visual effects” of the makeup, costumes, and other elements are restrained, yet highly expressive in a classic Japanese sense.