Prayer Beads Around the World

Prayer Beads Around the World

Prayer – whether silent, individual, and contemplative or loud, exuberant, and collective – is a central aspect of the world’s largest religions. You’ll be hard-pressed to find a religious tradition that doesn’t practice some aspect of prayer. From Christians to Buddhists, Jews to Muslims, Hindus to Bahai’i and more, they all pray in some fashion. Although the specifics of how they pray and who or what they pray to are different, there are a lot of common threads in prayer traditions around the world. One of those common threads is the use of prayer beads to aid in prayer. Prayer beads – known by different names – are found on all continents and most religious traditions.

They are one of the most simple prayer aids, helping induce a meditative state by connecting either chanting, or vocal and silent prayers with the physical action of counting the beads. Using physical body movements – flicking one bead after another – to count prayers removes the need for the person performing the prayers to hold and continue two parallel thought processes at once.

The person praying doesn’t have to sustain the prayers and simultaneously count them – the hand, using the prayer beads, does the latter. With this approach, one can sink into a deep spiritual state, unconscious of anything else but the subject of the prayer session. Beads are so closely tied to prayer, in fact, that the modern English word “bead” derives from the Old English “bede,” which means “a prayer.”

In this article, we’ll examine the various prayer bead traditions around the world. While it is difficult to say with certainty where prayer beads originated since beads are one of the simplest and most ancient of human artifacts, the earliest evidence that we know of shows prayer beads in use in Hindu prayers in India, so that’s where we’ll start.

In Hindu tradition, as well as other religious traditions found in and around India such as Buddhism, Jainism, Sikhism, prayer beads are called “japa mala.” The name comes from the Sanskrit term for the meditative repetition of a mantra or divine name – japa – and the Sanskrit word for “garland” or “wreath” – mala. The aim of using the japa mala can be different in different cases – some practitioners may use it to attain moksha or nirvana, or use it in when uttering mantras provided by a guru.

Japa mala prayer beads often consist of 108 beads. The number is considered sacred in Hindu tradition – Vedic mathematicians consider it to symbolize the wholeness of existence, there are 108 Upanishads (sacred scriptures of the Vedas) in Hinduism, and there are 108 sacred sites or pithas throughout India. In any case, japa mala beads consist of 108 beads as well as one “guru bead,” around which the rest of the beads revolve and which serves as a convenient indicator of when a full mantra cycle has been completed.

Japa mala beads are made out of a variety of materials, but two dominate in the Hindu tradition – the seeds of rudraksha trees or from the wood of the tulsi plant. The rudraksha tree is considered sacred by Shaivites, followers of the Hindu god Shiva, because of the belief that Shiva’s tears, falling to earth after 1000 years of the god’s meditation, created these trees. The tulsi plant, sometimes known as holy basil, is an aromatic plant used for traditional medicine purposes in herbal teas, and, of course, for prayer beads – it is held in high regard especially by Vaishnavas or followers of the Hindu god Vishnu. 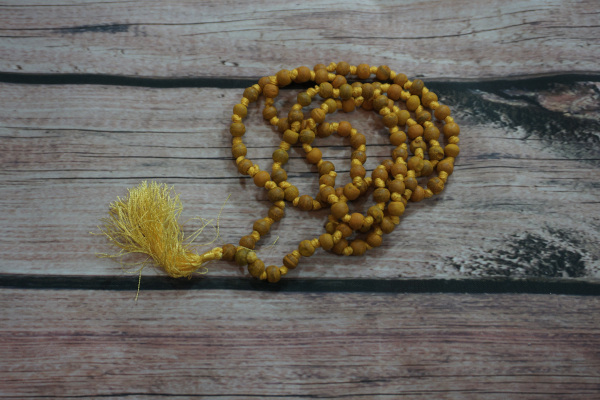 A Mala Prayer Necklace Made From Turmeric Beads

Buddhism, having originated in India, also has prayer beads that are called mala. In more distant Buddhist cultures, though, prayer beads also have different names – in the Zen Buddhist tradition found in Japan, for example, they are called ojuzu (or simply juzu), and some Theravada Buddhists in Myanmar call prayer beads badi.

Similarly to Hindu beads, Buddhist prayer beads are made up of 108 beads or an even division of them – 18, 27, or 54 beads. Depending on the Buddhist tradition and locally available materials, beads can be made of different materials – seeds, stones, or valuable metals such as silver or gold. The seeds of bodhi trees (ficus religiosa) are used, as are those of the rattan plant – at first an ivory color, they turn golden-brown with long use and are covered in small “moons” (holes) and “stars” (black dots), symbolizing the vastness of existence.

In Tibet, which is not covered by lush and plentiful vegetation that could be used to make beads, mala prayer beads are made from yak bone. Mala beads that are made from human bones are considered even more spiritually valuable. The bones of dead lamas, imbued with their spiritual attainments, are the most coveted – many people consider them to be of great aid in attaining nirvana.

It’s not just the traditional Asian religions, however, that use prayer beads. The Abrahamic religions of Christianity, Judaism, and Islam also have prayer beads. Catholics and some Protestants use them and call them “rosaries.” Eastern Orthodox Christians – such as Greeks and Russians, as well as Eastern Catholics – often use what are known as prayer ropes, and have different names for them – komboskini in the Greek Orthodox tradition, chotki in the Russian Orthodox, and other names in other cultures.

The most well-known Christian prayer beads, the Catholic rosary, gets its name from the Latin word rosarium, or “crown of roses.” It grew out of an older tradition practiced by the Desert Fathers (and Mothers), the founders of the Christian monastic tradition. These early hermits, from the 3rd century AD, lived simply in the harsh conditions of the deserts of Egypt.

They didn’t have time to make beads – instead, they opted for a simpler approach. They formed prayer ropes, with string or rope fashioned into the shape of the cross with knots, after which they made a loop that also had a number of knots. They used this to keep track of the number of times they said prayers (usually the Jesus Prayer) throughout their days. Soon enough, these prayer ropes found their way into the Eastern Orthodox traditions, and have remained there since.

Catholic rosaries, however, are much more closely connected to the symbolism of Mary, mother of Jesus. The legend is that it was given to Saint Dominic by an apparition of the Virgin Mary in the year 1214, and although several scholars have argued that its origins lie elsewhere, this is the piously-accepted origin story. Rosaries are used to integrate prayer sequences – known as “decades” – into sessions of spiritual contemplation and meditation.

These sequences are made up of the Lord’s Prayer, 10 Hail Marys, as well as a Gloria Be and other prayers at the beginning and the end. With the recitation of each decade, thought is given to one of the Mysteries, the events of the life of Jesus. Rosaries are so important to Catholic spiritual tradition that Pope John Paul II called it “among the finest and most praiseworthy traditions of Christian contemplation.”

It should come as no surprise, knowing that early Christian monks lived in modern-day Egypt, to find out that Islam also has a tradition of using prayer beads. Islamic prayer beads are known as misbaha, and they are used to perform tasbih, a form of Islamic prayer that involves uttering short sentences in praise of Allah. Misbaha are made up of 99 beads, with two mini-beads that separate the larger beads into sets of 33. The number 99 is, according to some people, a reference to the 99 names of God (or Allah), and it is also connected to the tasbih, in which three phrases are uttered 33 times each.

The phrases are “subhan Allah” (glory be to God), “Al-hamdu lilah” (praise be to God), and “Allahu akbar” (God is great). Misbaha prayer beads are made of wood, olive seeds, ivory, amber, as well as other, more modern materials – not least among them plastic. Misbaha are considered an appropriate and acceptable form of devotion in mainstream Islam. But extremist schools of Islamic thought, such as Salafism which is the ideological basis for terror groups such as ISIS, consider misbaha an unacceptable innovation and a form of heresy, banning their use in the territories they control.

Prayer Beads in Other Religious Traditions

While Judaism doesn’t have a prayer bead tradition, with Orthodox Jews frowning upon the use of any such aids to prayer, the Jewish prayer shawl, the tillit, has what are known as tzitzit. These special tassels that have 4 knots remind observant Jews of their religious duties. Tzitzit possibly had a similar function to prayer beads.

Since prayer is such a fundamental part of so many of the world’s religious traditions, and since beads are such an ancient and fundamental human creation, it seems almost obvious that the two would be combined for spiritual purposes. From the northernmost islands of Japan to Rome, from Varanasi to Buenos Aires, prayer beads play a role in the daily religious practice of millions of people.

About the Author: Mary-Anne Rochester