An Introduction To Japanese Zen Gardens

Zen gardens, ranging from large and colorful landscapes with plants and water elements such as streams and ponds, to austere, simple rock gardens with stones large and small set amidst raked sand or gravel, have been a feature of Japan’s cultural landscape for at least a thousand years and possibly longer.

They represent man’s search for inner understanding and peace and are designed to instill a sense of calm in the viewer, allowing for self-reflection and meditation.

These gardens were inspired by the exchange of culture between China and Japan – for 1000 years before the appearance of such Zen gardens in Japan, landscape gardens were being created in neighboring China. There, too, they had religious foundations – the first such garden, constructed by a Han dynasty emperor named Wu, was intended to represent a holy mountain that, in Chinese legend, was said to be the home of eight immortal beings. The emperor’s hope was that by creating a beautiful landscape garden, these immortal beings would be drawn to his garden, even mistaking it as their own home, and grace him with their presence. That didn’t happen, of course, but the landscape garden craze was born.

The turning point that led to the creation of the kind of Zen rock gardens that are well-known and famous around the world nowadays came during the reign of the Song dynasty in China. Japanese Zen monks, going to China to study, came back with deep appreciation for the art form of Sung monochrome painting – simple, reserved paintings made with black ink, diluted to various shades of grey as necessary, on parchment. Few brush strokes and landscapes painted in an incomplete way, to suggest mist or the vastness of nature, appealed to the monks who found the distillation of landscapes to simple, abstract shapes to be representative of their religious and meditative practices.

With the return of these monks to Japan, the rise of the samurai warrior class and their appreciation for the Zen philosophy, and the progress of the Muromachi era, this visual austerity and simplicity became a much more popular approach to the design of Japanese gardens, especially those in or near Zen temples. Water elements, once a staple of such gardens, came to be replaced by white sand and gravel, which had long been elements in Japanese gardens and symbolized purity in the Shinto religious tradition.

In Zen gardens, they came to symbolize water or, like the negative space in Zen paintings, the emptiness of reality – what in Buddhist tradition is called sunyata. These gardens increasingly came to be associated with the serious and solemn religious practice of Zen Buddhism. They received the label of kare-sansui – “dry landscape.” In this era – known as the Kamakura era of Japan – the Zen garden came to represent the Western Paradise of Amida Buddha.

The contrasts between Chinese and Japanese gardens were many – whereas the Chinese cultivated symmetry and didn’t hesitate to present their gardens as somewhat fantastical exercises of the imagination, with unnatural and unusual features, Japanese Zen tradition favored asymmetry and naturalness that suggested the endlessness of nature and existence. 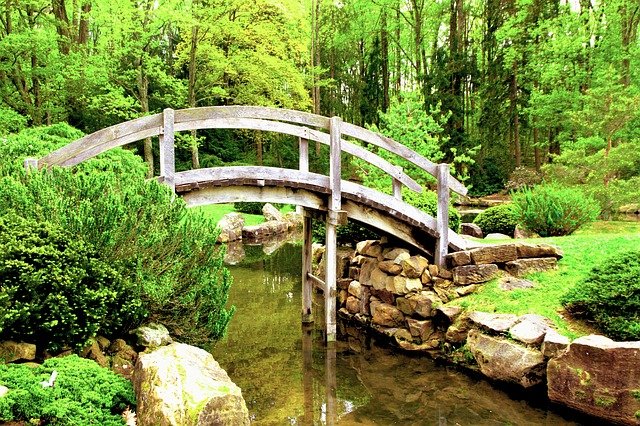 A Bridge in a Japanese Zen Garden

Japanese Zen gardens are even more different from Western gardens. Whereas famous gardens in the Western world, such as those at Versailles, reflect a belief in an intelligent, rational designer who crafted the world – the God of Abraham – Zen Buddhism has no such creator. Instead, existence arises from emptiness and returns to it, and realizing this is the key to enlightenment. There are also fundamental aesthetic design differences. While palace gardens such as the ones at Versailles, built in symmetrical geometric shapes, were laid out in open vistas stretching towards the horizon, Zen gardens curved in on themselves, providing the impression of wilderness that went on and on despite being only a few acres in size. Zen gardens have no well-kept lawns that visitors can lounge around or picnic on – they are intended to be viewed, more like Western art than Western gardens.

The images most closely associated with Zen gardens in popular culture, however, are those of the famous Zen rock gardens. Smaller in size than the parks available to early Japanese aristocrats, and built after a period of ruinous wars, these gardens are, in a way, an ultimate expression of Zen art. They were created in times of poverty on the grounds of temples which could not afford to maintain the relatively luxurious gardens of previous eras. They put aside any notion of decorating for aesthetics and instead focused on the task of monks and other seekers of enlightenment – meditation. The monks could reflect on the fleeting nature of life, and, having done so, dedicate themselves all the more to attaining the inner freedom of nirvana.

Rock Gardens and the Circle of Life

This fleetingness applies to the Zen gardens themselves. Some of the most famous and well-known rock gardens, such as Daisen-in of Daitoku-ji, one of the five most important Zen temples in Kyoto, were created with rocks looted and collected from older rock gardens, whose temples or estates had been burnt down or destroyed during the military conflicts that characterized the Muromachi period. Daisen-in, with its dry, yet flowing gravel river symbolizing the journey of life, was also a result of hundreds of years of collection of choice rocks – the “specimens” best suited, in the eyes of the garden designers, to this mission. In that sense, the rocks at Daisen-in represent the crème de la crème, the best of the best, of painstakingly collected Zen garden rocks. 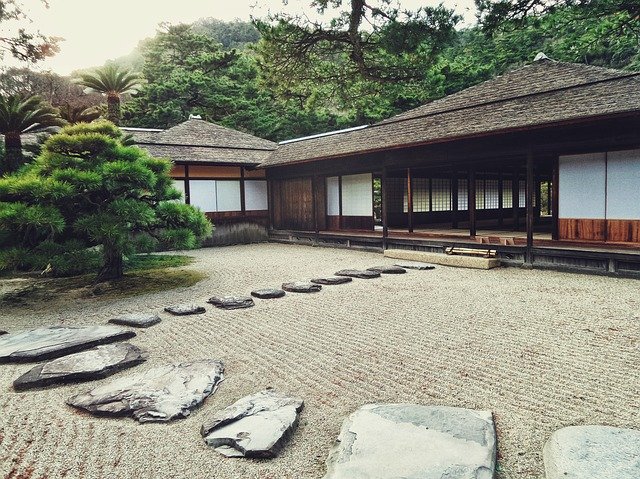 The fact that Zen gardens have remained and continued to impress visitors and bring peace of mind to viewers and meditators is a testament to their cultural and artistic value.

It is a creative style that is unlike any other. The intention is not to control nature, nor to represent it – but to suggest it. A suggestion which is made by stripping away all that is surplus and redundant, and condensing all that is necessary into simple, yet visually striking statements. This, of course, is in line with important parts of Japanese culture – reverence for the timeless, deep respect for the mystery of nature and the promise of inner peace once it’s understood.

About the Author: Keith Baker

Keith Baker is an author who specializes in the study of family and culture. His work focuses on the ways in which families shape and are shaped by the cultures in which they live.