Medieval Japan was an interesting time period. The emperors and religious rulers of the past had lost much of their power as the new feudal era began. These wealthy aristocrats of the prior age were replaced by Shoguns and Samurai who took control over small regions of land throughout Japan.

During this time, there were also many advancements in Japan, particularly in the fields of Agriculture and trade. At the start of this era, Japan only had about 7 million people, but by the year 1600, their population had grown to approximately 25 million.

All of this had a distinct impact upon the development of Japanese culture.

Despite there being many negative aspects to feudal Japan, such as it’s profession-based caste system and it’s immense number of civil wars, the development of Japanese art and culture flourished during this time.

Many of the practices which developed during this time are still practiced today, such as the Three Classical Japanese Arts of Refinement which include kōdō (The Way of Incense), kadō (Artistic Floral Arrangements) and chadō (The Famous Tea Ceremony).

Together these arts serve as a key remembrance of Japan’s old culture and way of life.

Kōdō (The Way of Incense)

In essence, Kōdō is the Japanese art of appreciating incense. It involves Monkō, or ‘listening’ to the incense. The fragrance of the incense was used not only for simple pleasure, but to tell stories, or even play games.

Incense sticks were not very common in feudal Japan. The traditional way to practice Kōdō is to burn pieces of fragrant wood or other materials in small censers. The censers were then passed around and the fragrance was inhaled.

One of the most revered materials to burn was resinous agarwood, which was typically harvested in Vietnam, Indonesia, and other surrounding areas.

Out of all the materials burned in feudal Japan, agarwood is probably the most fabled. It’s bitter and musky aroma is often considered something of lore now that quality wild agarwood has become incredibly rare and relatively unaffordable.

Although agarwood comes from the ‘aquilaria’ tree species, it’s important to note that the ordinary wood does not normally contain the treasured resin or fragrance. The aromatic resin develops over a period of many years after the wood has been infected with a certain bacteria. The bacterial infection initiates a self-defense mechanism within the tree, causing it to exude a dark resin in an effort to protect itself.

The resinous material used to be more widely available, but the material has been over-harvested due to its value, and since it takes so long for the resin to be produced in nature, the price has skyrocketed, while the quality of available material has diminished. This has caused speculators to invest considerable amounts of money into agarwood, hoping that it’s value may increase over the years as it becomes increasingly rare.

Although there have been significant efforts and attempts to cultivate agarwood on plantations, the quality typically isn’t comparable to wild material.

The Ten Virtues of Koh

The Ten Virtues of Koh is an ancient document written by Buddhist monks in the 15th century which lists the numerous benefits of koh (incense). The Ten Virtues of Koh give us a glimpse into the sophistication of feudal Japan and shows us that the time period wasn’t all bloodshed and tears. 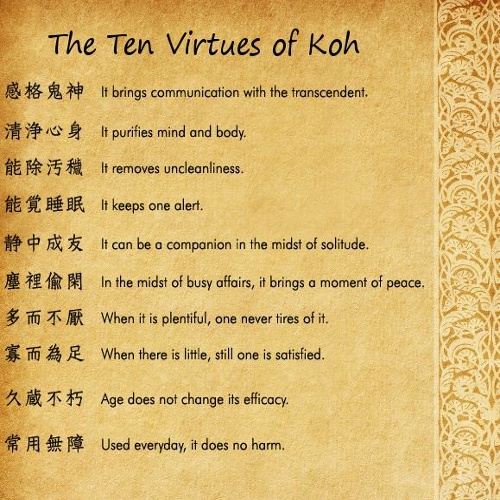 Kadō is another one of the Three Classical Japanese Arts of Refinement. This practice, interestingly enough, did not originate in Japan. This custom developed in China during the 7th century and was borrowed alongside many other traditions, including Buddhism.

Simply put, Kadō is the art floral arrangement. It was not done simply because of it’s beauty, but because it was considered an introspective practice which could help teach one about oneself.

This practice was not forgotten and is still widely practiced today. There are still many, many schools in Japan which you can take Kadō courses at. The most famous one is probably Ikenobō.

The last of the Three Classical Japanese Arts of Refinement on our list is Chadō.

Chadō translates to ‘The Way of Tea’. An example which most people would probably be familiar with is the matcha tea ceremony. However, Chadō ceremonies are actually much more complex in nature. The instructions are often long, and each step is to be taken with careful consideration and thought, as Chadō ceremonies still means a lot to the Japanese people.

Chadō was invented by Sen no Rikyū, the head of Tea for Toyotomi Hideyoshi, a prominent politician from the 15th century. Sadly, Toyotomi, Hideyoshi eventually ordered Rikyū to put himself to rest. However, three distinct Chadō schools developed from these circumstances. These schools had a hefty influence on Japan, and spread ‘The Way of Tea’ throughout Japan in honor of their fallen master.